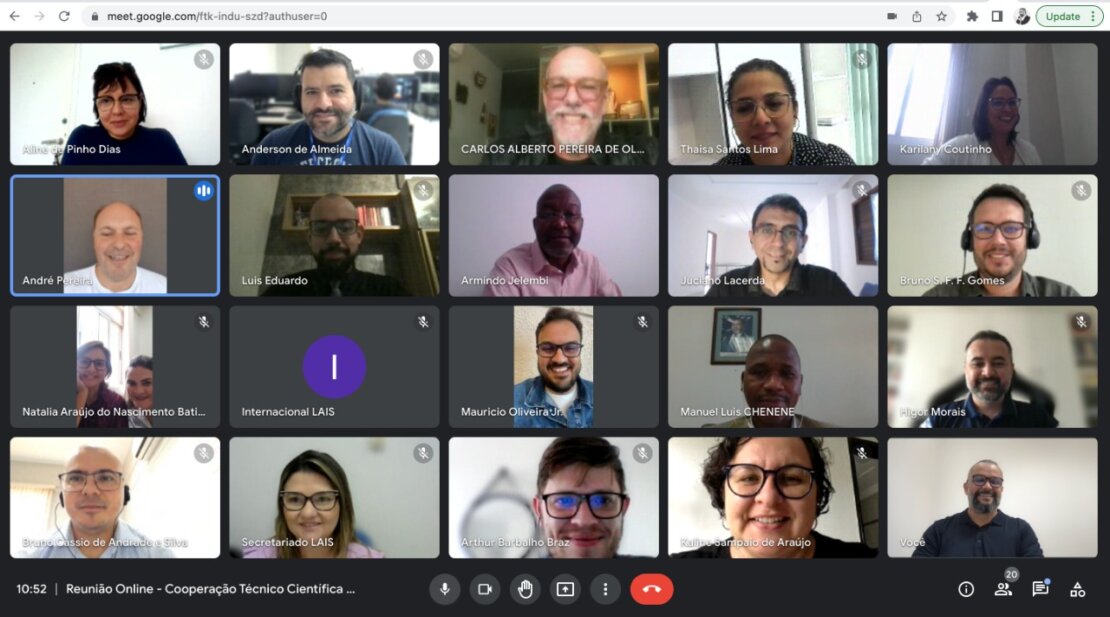 Researchers from the Laboratory for Technological Innovation in Health of the Federal University of Rio Grande do Norte (LAIS/UFRN) met this Monday (22), with researchers from member countries of the Community of Portuguese Language Countries (CPLP). The meeting established the beginning of negotiations for the alignment of a technical cooperation agreement between the institutions participating in the meeting.

In the meeting participated the professors Armindo Gideão Jelembi, from the Eduardo dos Santos University, in Angola; André Pereira, from the Law School of the University of Coimbra, in Portugal; Manuel Luis Chenene, Cooperation Director from the Eduardo Mondlane University, in Mozambique; and Father Bantu Mendonça Sayla, from the Higher Polytechnic Catholic Institute of Benguela, in Angola. On behalf of LAIS, besides the executive director, Ricardo Valentim, professors Karilany Coutinho, Juciano Lacerda, Carlos Alberto Oliveira, Higor Morais, and Thaísa Santos Lima were also present, as well as researchers from the areas of communication, law, and international relations.

The director also reinforced that regarding the cooperation already aligned with the UC, the expectation is that the new work plan will be even more comprehensive, i.e., that “it will include all the projects developed between the institutions”.

For Professor Armindo Jelembi, from Angola’s Eduardo dos Santos University, the meeting was an important step in the relationship between CPLP member countries, especially in the scope of research and teaching. “I see cooperation as a possibility to enhance our institutional capabilities. Today, in this context of globalization, it is important that the Portuguese-speaking countries unite for the development of the human person, focusing on the use of science tools. For us, there is no precedent for cooperation with a research center with LAIS’s expertise in the area of health technology,” he said.

Broadening Right to Health initiatives in the Portuguese language
One of the common areas of concern for the participants in Monday morning’s meeting was the right to health, an area that gains even more relevance in this globalized scenario. For Professor André Pereira, from the University of Coimbra, this is an important movement, especially in the area of research. “I am very pleased in these areas to be able to develop health law in Portuguese, since there are several publications in English, worldwide. I am available to participate in this LAIS network, with Angola, Mozambique and Portugal. The question was also reinforced by Father Bantu Mendonça, from the Higher Catholic Polytechnic Institute of Benguela, in Angola: “our collaboration will be welcome in this regard, you can count on us, especially in this epistemological field,” he added.

For Professor Manuel Chenene, Director of Cooperation at Mozambique’s Eduardo Mondlane University, the initiative comes at an important moment for higher education in the African country. “Our university embraces all areas of knowledge. We recently celebrated 60 years of higher education in Mozambique, and it is entirely in our interest to participate, to collaborate in this network, both for student mobility, and for those who come to our university, we have every interest”, he said.

Panel debates the importance of innovation in human training in health

By Jordana Vieira / Ascom LAIS Aiming to discuss the impact of education on health, the panel "Health Education: the impact of...

By Letícia Meira - Ascom/LAIS In order to understand the challenges of the neediest class in basic health care and seek solutions for a...