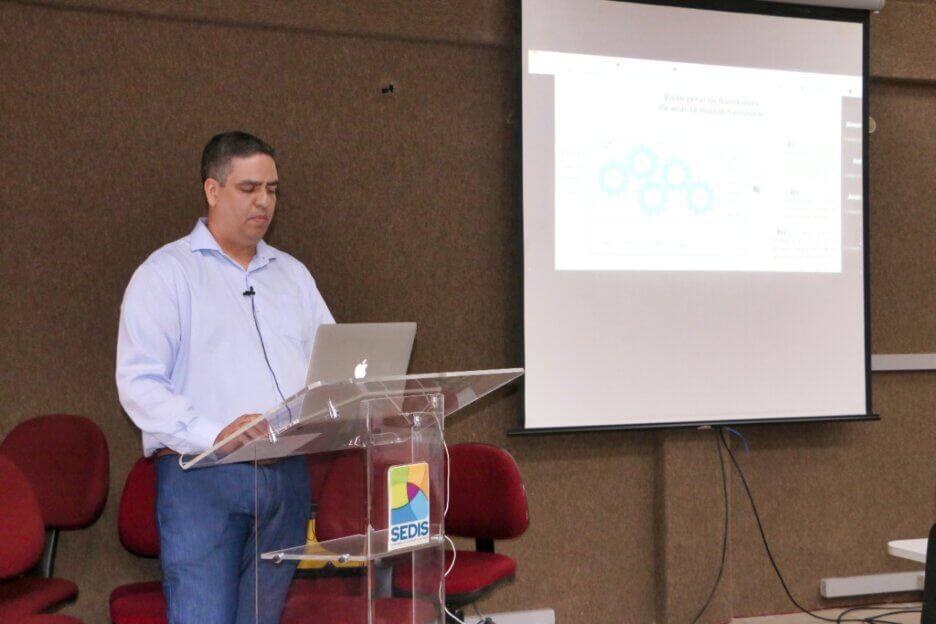 “A Framework for Multidimensional Evaluation of Interventions in Public Health” is the title of the doctoral thesis defended on Friday (02), in the auditorium of the Distance Education Department of the Federal University of Rio Grande do Norte (SEDIS/UFRN) by the researcher of the Laboratory for Technological Innovation in Health at the University, Rafael de Morais Pinto, linked to the Graduate Program in Systems and Computing of the institution.

After about five hours of presentation and interactions, the thesis was approved with honors by the members of the committee coordinated by professors Lyrene Fernandes Silva, from the Department of Informatics and Applied Mathematics of UFRN (supervisor), and Ricardo Valentim, from the Department of Biomedical Engineering of UFRN and also executive director of LAIS/UFRN (co-supervisor). Among the evaluators were experts in the fields of information systems and public health.

The research fostered the development of a system called “Hermes” that made it possible to evaluate public health communication campaigns by the dimensions of communication, epidemiological data, and education. It was produced under the “Syphilis No” Project, starting in January 2019, and is the result of technical cooperation between LAIS/UFRN and Athabasca University in Canada. “The emotion is immense, the pride of being able to collaborate with the whole world and generate knowledge that can be used in various situations and by various audiences,” commented the research advisor, Lyrene Fernandes, after the finalization of the stand.

To Ricardo Valentim, the thesis was able to establish the causality link, that is, to establish the relationship between cause and effect, proving that as the news produced with quality about syphilis were published, showing the damage caused by the disease, the number of rapid tests to diagnose the disease increased, for example. “It is a work that has a great insertion for the induction of public health policies, especially when it comes to improving investments in health campaigns,” concluded Ricardo Valentim.

Throughout the production of the manuscript, Rafael Pinto participated in the preparation of several articles published in national and international scientific journals, such as The Lancet Americas, one of the main scientific publications in the world that, in March 2022, printed on its cover a new version of the work “The Inheritance”, by Norwegian painter Edvard Munch, to highlight an article on the analysis of interrupted time series for the understanding of the congenital syphilis epidemic in the country.

Rafael Pinto evaluates that the publication in this magazine confirmed all the effort to conclude the research: “it is a great satisfaction for those who witnessed it, for those who participated, to see this work on the cover of The Lancet”. About the result of his thesis, he emphasized the several collaborations he received: “there was a transdisciplinary and a mutual learning, with researchers from other areas, such as communication, public health and technology, to show this impact analysis of what the ‘Syphilis No’ Project brought to the population”.

Partnership between LAIS and Jaboatão dos Guararapes (PE) is expanded

By Heloísa Lemos - Ascom/LAIS Between March 28 and 29, researchers from the Health Technological Innovation Laboratory (LAIS) were in...