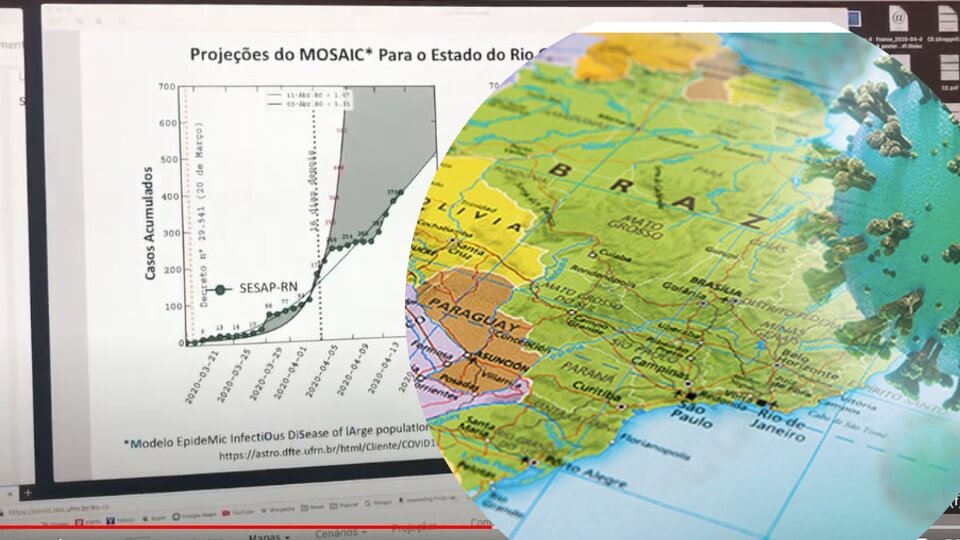 At the moment when Rio Grande do Norte surpasses the house of 50 dead by COVID-19, data show that this number could vary between 9 thousand and 10 thousand deaths, if the society of Rio Grande do Sul was not in social isolation. The data are demonstrated using mathematical models, built by professor and researcher José Dias do Nascimento, from the Physics Department of the Federal University of Rio Grande do Norte (UFRN). This estimate is for April 29. Just six days ago, the same model was designed by the researcher and pointed to 2,200 deaths. That is, in less than a week, 7,900 potiguares could have died.

Social isolation has been applied, worldwide, as one of the main tools to face the pandemic. The distancing is based on restricting the traffic of people on the streets, with the closing of commerce, suspension of school activities, leaving only the strictly necessary circulation of people and services.

The decree published by the Government of the State of Rio Grande do Norte extends the term of social isolation until May 5, however, easing some specific activities, such as civil construction, the hotel sector and some personal hygiene activities, such as barber shops.

However, even before flexibilization, the local population was not fully complying with social isolation to achieve what is guided by researchers and public authorities. According to the scientists, isolation of 70% of the population would be necessary for the epidemiological curve to be contained, reducing the risk of causing a collapse in the health system.

In Rio Grande do Norte, the social isolation rate of the population today is 49%, according to monitoring carried out on the Inloco website, which updates its data daily. According to UFRN professor and researcher José Dias, who is at Harvard University, in the United States, social isolation ensured a lower number of deaths among the population of Rio Grande do Sul. “If we hadn’t done anything and the system was free, today we would have more than 9 thousand deaths in Rio Grande do Norte alone”, he said.

For the researcher, measures to restrict the population’s displacement were fundamental so that these numbers did not become reality. He still warns about the return of activities. “We had the school restriction decree, which was a great contribution to the fall of the curve. Restricting, insuring and isolating extremely severely makes the whole process shorten between the beginning and the end, this is exactly the great difficulty for people to understand ”, added the researcher.

The importance of mathematical models
Mathematical models have always been used as tools to manage epidemics. The first recorded use was in 1919, with the Spanish flu epidemic. The main function of the models is to serve as a tool in the absence of mass testing that gives a real and accurate diagnosis of the scenario, as well as the absence of a vaccine, which can immunize the population.

The difference for the 21st century is in what researchers call data science, an extremely robust physical model with very agile data acquisition. Through these models it is possible to predict when the epidemic wave will arrive, the intensity, the end and the effects of social isolation.

In addition to the scenario in Rio Grande do Norte, José Dias projected situations in Ceará, Pernambuco, Bahia and Alagoas at the request of the scientific committee of the Northeast, under the coordination of neuroscientist Miguel Nicolelis.

As he explained, the mathematical model is the main instrument to face the pandemic. “In most countries, we do not have massive testing that gives a real diagnosis of the situation. The only way to measure the epidemic level is through models, something already established in science. In the absence of tests, the models are a light that clarifies the future when making decisions ”.

By Arthur Barbalho and Bruno Cássio – ASCOM/LAIS Researchers from the Laboratory for Technological Innovation in Health of the...

A partnership between the Laboratory for Technological Innovation in Health (LAIS/UFRN) and the Espírito Santo State Government has...

An action aimed at strengthening the fight against syphilis among the population of Ceará. It is with this premise that the State...

Bruno Cássio - Ascom/LAIS/UFRN The Laboratory for Technological Innovation in Health (LAIS/UFRN) has increasingly expanded the...