A new version of the work “The Inheritance”, by Norwegian painter Edvard Munch, is the theme of the cover of The Lancet, one of the main scientific journals in the health area in the world. The reinterpretation is by Brazilian digital illustrator Beto Lima, and was prepared to accompany the article “Use of Interrupted Time Series Analysis in Understanding the Course of the Congenital Syphilis Epidemic in Brazil”, which brings results obtained by the “Silifis Não” Project, developed in Brazil.

The original work depicts a woman of the aristocracy. In her lap, her child, born dead as a result of congenital syphilis, refers to the pain of the painting’s title. Through a request from the authors of the article (entitled in Portuguese: Uso da Análise de Séries Temporais Interrompidas na Compreensão do Curso da Epidemia de Sífilis Congênita no Brasil), Beto Lima brings the Brazilian woman, in a basic health unit, waiting to be attended to her son, born healthy, after being treated for maternal syphilis.

For the illustrator, the re-reading brings the opposite feeling of the original work. “While Munch’s work portrays the pain of death, with dark colors and little lighting, our version tries to bring hope, with the blue color, more lighting, and the butterflies on the clothes, reminding the transformation that the syphilis treatment brings to people’s lives”, reminded the artist. 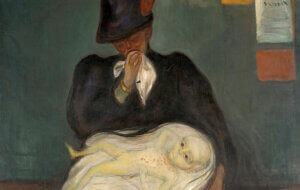 LAIS’ executive director, Professor Ricardo Valentim, also reinforced the importance of the artwork done by the artist from Potiguar, in line with the Syphilis No Project: “The figure also portrays the intervention of the Syphilis No Project – with its brand – and the reduction in the number of cases. The retelling also brings the slogn of the Sífilis Não project – test, treat, cure – three fundamental elements for the reduction of congenital syphilis in Brazil, eliminating vertical transmission.”

With the title in Portuguese, uso da Análise de Séries Temporais Interrompidas na Compreensão do Curso da Epidemia de Sífilis Congênita no Brasil , the article published in The Lancet is based on the thesis of Professor Rafael Pinto, PhD student at the Graduate Program in Systems and Computing at UFRN, under the guidance of professors Lyrene Silva and Ricardo Valentim, both from UFRN.

The article presents important scientific findings in the context of facing syphilis in Brazil, while discussing results based on the use of computational methods, with robust statistical models of linear regression to measure the effectiveness of public health policies. Linear regression is a mathematical form that scientists use to observe and demonstrate trends, i.e. whether cases are increasing or decreasing.

The scientists were able to demonstrate in the article published in The Lancet the effectiveness of the intervention actions of the “Syphilis No” Project in the Brazilian territory. The results point out that if the set of actions of the “Syphilis No” Project had not been implemented Brazil could have experienced a 28.79% increase in congenital syphilis cases in Brazilian municipalities, which were defined as priorities by the Ministry of Health, by the end of 2019.

According to the researchers, the results are encouraging, as they were able to demonstrate that the computational methods applied contributed to evaluate the effectiveness of public health policies – “this is very innovative and impactful, as it allows the use of new methodologies for evaluating and monitoring public health policies, which strengthens public management and strengthens social control,” said Professor Ricardo Valentim.

Another important scientific finding, discussed in the article by the authors, also based on the computational algorithms developed by them, is that Brazil, after more than a decade, managed to change the trend of notifications of syphilis cases. The country maintained, until 2018, an increase in cases, year after year. However, starting in 2019, a reduction in cases of acquired, pregnant, and congenital syphilis was verified. Although several challenges still need to be overcome, for example, the elimination of vertical transmission of congenital syphilis in the country, scientists consider this to be important data, because it is not easy, nor trivial, to change a negative trajectory of notification of cases after more than 10 years of successive increases.

The computational methods applied correlated this positive change of trend to the interventions of the “Syphilis No Project”, cases started to reduce in Brazil after this project. This phenomenon hasn’t been registered in Brazil for a long time, more than a decade with records of increase of cases is not easy to overcome”, said Rafael Pinto, one of the authors of the article.

By Valéria Credidio/ LAIS/UFRN Communication Advisor Integrants of the protocol performed in all primary health units in the care of...

On the next day 4, the Laboratory for Technological Innovation in Health, (LAIS / UFRN) promotes the debate "Contemporary challenges of...