A committee of researchers from the Laboratory for Technological Innovation in Health at the Federal University of Rio Grande do Norte (LAIS/UFRN) landed on Monday (12), in the city of Porto, northern Portugal, with the task of advancing the discussion of points for the preparation of a technical cooperation agreement with the Institute of Systems Engineering and Computers, Technology and Science (INESC TEC), known as the main Portuguese institution to work in the production of solutions in the areas of Information Technology, Engineering, Intelligent Systems Networks and Energy.

Miguel Coimbra, a researcher at INESC TEC and a professor at the Faculty of Science of the University of Porto (FCUP), conducted the negotiation rounds, under the supervision of Vladimiro Miranda, associate director and responsible for the Institute’s International Relations, who attended the meeting remotely due to health reasons. The agenda was divided in two moments, the first was marked by the exposure of the so-called points of contact, areas of action that bring LAIS and INESC TEC closer together. The second was dedicated to defining the roles of the Laboratory and the Institute in the execution of the work plan.

The director of the National Audit Department of SUS (Denasus), Cláudio Costa, who is also a Federal Auditor of Finance and Control of the Office of the Comptroller General (CGU), presented details of a partnership, underway with LAIS/UFRN, to implement a system for monitoring and efficiency in the application of public resources invested in health, such as auditing the Popular Pharmacy program, for example. For Cláudio Costa, “these are important partnerships that will provide better working conditions for audits in SUS”. 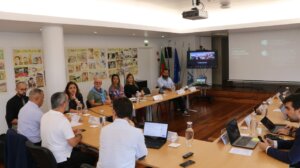 This is one of the initiatives that should receive the support of the Portuguese Institute. According to Miguel Coimbra, Portugal has undergone a series of transformations regarding the digitalization of health services, fraud detection, and the improved interoperability of technological solutions in the sector. “Taking this experience to such a different reality, with a larger dimension, such as Brazil, is something that excites us and motivates us to contribute to the modernization of Brazilian health,” emphasizes the Lusitanian researcher.

After several hours of conversations and alignments, the executive director of LAIS/UFRN and coordinator of the cooperation mission with the Portuguese institution, Ricardo Valentim, evaluated the meeting as very productive: “LAIS has a lot of intersection with INESC TEC researchers, based on this, we made a design of how the work plan will be, based on Data Science, Big Data, always thinking about how to improve the supply of public health services and governance,” he concluded.

In July 2022, a team from LAIS/UFRN was at the headquarters of the Institute that works inside the University of Porto’s facilities and started the construction of the technical cooperation agreement that should be signed by the end of this year, during a visit of INESC TEC’s director, Vladimiro Miranda, to Brazil.

By Dênia Cruz - Ascom/LAIS On Tuesday morning, one of the panels of the 3rd International Health Innovation Conference debated the...

“Every crisis brings an opportunity,” highlights international professor at opening of 3rd Conference

By Gabe Mascena (Ascom/LAIS) "Every crisis brings an opportunity." Based on this premise, Rifat Atun, professor of Global Health Systems...

By Bruno Cássio - LAIS/UFRN Communications Office Implemented in 2018, the Academic Management System of the Network of Technical...

In yet another action aimed at tackling the Covid-19 pandemic, the Laboratory of Technological Innovation in Health (LAIS) has been...