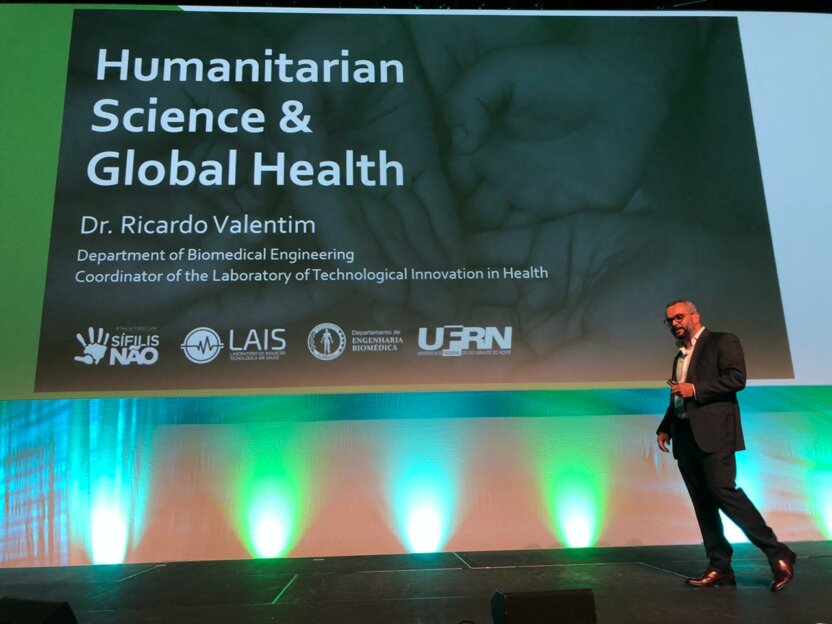 On the subject of Humanitarian Science and Global Health, Laboratory coordinator Professor Ricardo Valentim was the keynote speaker at the 28th World Conference on Online Learning, which brought together representatives from over 130 countries around the world, including China, the United States and Canada. Also present at the lecture were representatives of the Brazilian Embassy in Ireland. The event took place in Dublin during the period from 3 to 7 November.

During his conference, Ricardo Valentim, the only Brazilian speaker at the event, had the opportunity to point out some of the problems that exist in our society, such as hunger, illiteracy and poor health care. Problems with worldwide repercussions and advances in innovation have not yet found solutions.

From these problems, Professor Ricardo showed some of the work developed by LAIS, among them the project Syphilis No, as an opportunity for solution for the development of society in a human way.

Humanitarian Science and Global Health is the theme that has been developed by Professor Ricardo Valentim in his lectures in Brazil and other countries. “With this innovative approach, we are putting LAIS and Brazil at the forefront of this new area in the context of international science,” said Professor Ricardo.

Also during the event, the Brazilian delegation, formed by researchers from LAIS / UFRN, had the opportunity to present several works, resulting from the projects developed by the laboratory.

One of them was a scientific article entitled ”A Recommendation System on Educational Resources for the Syphilis Rapid Response Project in Brazil, by our researchers Sedir Morais and Rodrigo Silva. This work has been awarded as impact work for the betterment of society ”.

The publication, which is also signed by professors Ricardo Valentim, Karilany Coutinho, Carlos Alberto Oliveira, Azim Roussanaly and Anne Boyer, was developed in partnership with Lorraine Laboratory of Research in Computer Science and its Applications (LORIA), University of Lorraine, in France.

Researcher Sedir Morais, who presented the work in Congress, highlighted the importance of the award. “It is very gratifying, because it is a work that has been carried out in favor of public health in Brazil, of great impact, and that has been developed in an international cooperation between LAIS and a French university, which shows UFRN’s leading role in the international scientific community, ”he said.

LAIS/UFRN’s work is awarded by the Federal Administration Council