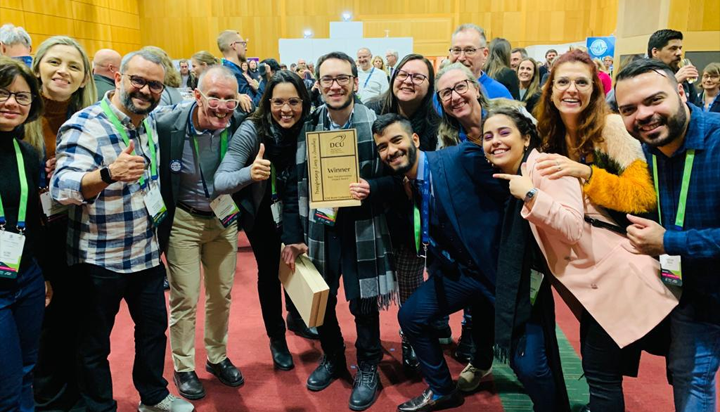 A scientific article developed by researchers from the Laboratory of Technological Innovation in Health of the Federal University of Rio Grande do Norte (LAIS/UFRN) was awarded on Tuesday (5) during the 28th edition of the Congress of the International Council for Open and Distance Education (ICDE), which takes place in Dublin, Ireland.

The article entitled “A Recommendation System on Educational Resources for the Rapid Response to Syphilis Project”, by our researchers Sedir Morais and Rodrigo Silva, was awarded as “impact work for the improvement of society” in a ceremony held this afternoon.

The publication, which is also signed by professors Ricardo Valentim, Karilany Coutinho, Carlos Alberto Oliveira, Azim Roussanaly and Anne Boyer, was developed in partnership with Lorraine Laboratory of Research in Computer Science and its Applications (LORIA), from the University of Lorraine, France.

The researcher Sedir Morais, who presented the paper at the Congress, highlighted the importance of the award. “It is very gratifying, because it is a work that has been carried out in favor of public health in Brazil, of great impact, and that has been developed in an international cooperation between LAIS and a French university, which shows the protagonism of UFRN in the international scientific community,” he said.

By Bruno Cássio - LAIS/UFRN Communications Office   "A Framework for Multidimensional Evaluation of Interventions in Public Health" is...

By Bruno Cássio - LAIS/UFRN Communications Office Implemented in 2018, the Academic Management System of the Network of Technical...

The Laboratory of Technological Innovation in Health at the Federal University of Rio Grande do Norte (LAIS / UFRN), in partnership with...