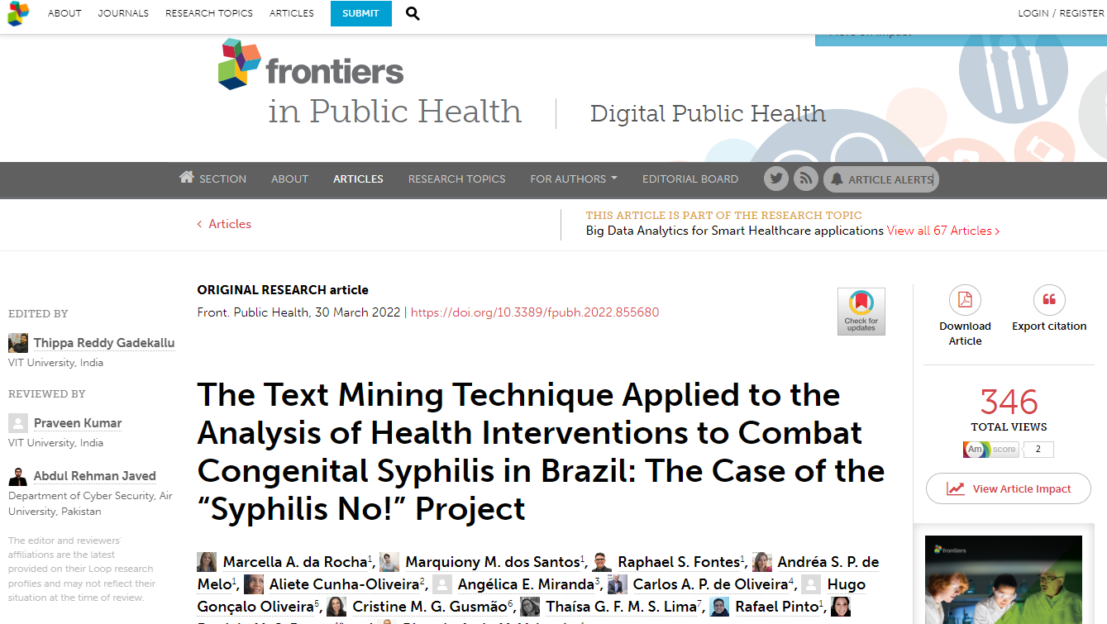 Brazilian scientists have developed a system based on computational intelligence that evaluated public policy interventions to confront syphilis in the five regions of Brazil. Using an intelligent algorithm, the researchers used the text mining technique to automatically analyze over four thousand reports produced by 54 field researchers working in 74 municipalities throughout Brazil with the highest incidence of syphilis.

The results achieved resulted in the article “The Text Mining Technique Applied to the Analysis of Health Interventions to Combat Congenital Syphilis in Brazil: the case of the “Syphilis No!” Project” published in the scientific journal Frontiers in Public Health, in the Digital Health section. The research is the result of the doctoral thesis of student Marcella Andrade, whose guidance is from Professor Ricardo Valentim, Executive Director of the Laboratory for Technological Innovation in Health (LAIS / UFRN). For the publication in the scientific journal, the article had the collaboration of other researchers from Brazil and Portugal.

According to the researchers, the system that uses an artificial intelligence model was able to measure the impacts of intervention actions in the field of public health in the face of the serious crisis caused by Syphilis. Based on the evidence found in the research, the scientists were able to observe a set of actions developed throughout the national territory between the period 2018 and 2020.

The intelligent algorithm was able, for example, to identify that the topic “Syphilis” was on the agenda of municipal health agendas throughout Brazil, something that had not occurred for at least two decades, which recorded successive increases in the number of cases. “This is an important finding, because the inclusion of the topic in the public health agenda of municipalities represents a fundamental step towards consolidating the policy of response to syphilis in Brazil. It is important to highlight that until 2017 syphilis was considered as neglected in the country,” Ricardo Valentim pointed out.

The scientists were also able to identify, in a quantitative way, a significant set of actions developed related to the integration of surveillance and health care, in the fight against congenital syphilis and vertical transmission of syphilis (when syphilis passes from mother to baby) in Brazilian municipalities.

By Dênia Cruz and Jordana Vieira - Ascom/LAIS On Thursday morning (28), the executive director of the Laboratory for Technological...