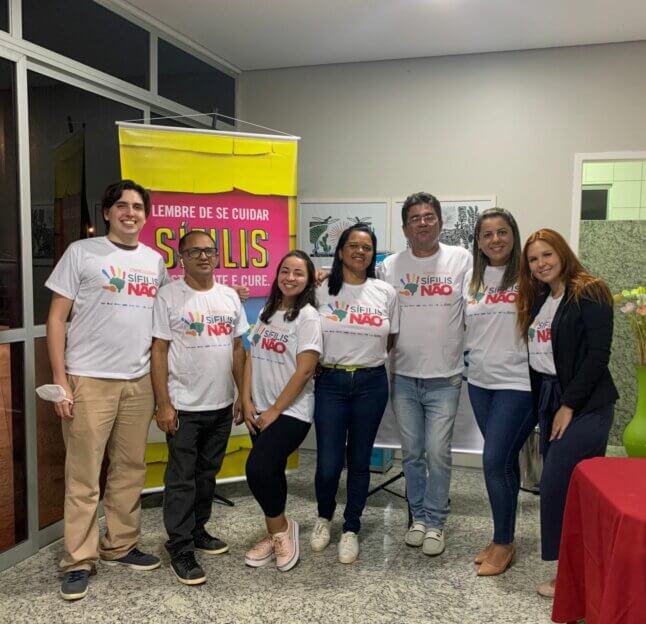 Researchers from the Laboratory for Technological Innovation in Health (LAIS/UFRN) participated in the XXI National Meeting of NGOs, Networks and Movements against AIDS (ENONG 2022), held on April 27-30 in Fortaleza, Ceará. During the event, the research data and the results developed by the “Syphilis No” project were presented to the participants from different parts of Brazil involved in the cause of fighting HIV/AIDS and other Sexually Transmitted Infections.

Hundreds of people were able to learn about the project’s broad and distinct axes of action, such as: management and governance, surveillance, integral care, and strengthening of education and communication, through the stand made available by the event. The participants had free access to the distribution of male and female condoms and informative booklets about syphilis.

For LAIS researcher Lucas Gaspar, this meeting with NGOs leads to a body of knowledge that can contribute to people’s daily lives and to spreading the message in their territories. “I believe that the “Syphilis No” booth may have reached the lives of the people who participated in the ENONG in two main ways: regarding the knowledge and sources made available, because it helps in personal and community decision making; regarding the contact with the Project itself and its researchers, because it allows the creation of partnerships and exchanges that can boost and potentialize even more the fight against syphilis and other STIs”, he said.

“We are grateful for all the support from LAIS and the “Syphilis No” Project, and this interaction was very significant, making it possible to present the project from up close to several groups, including representatives from each state,” reinforced the executive coordinator of Articulação AIDS RN, Sérgio Fabiano Cabra.

No Syphilis Project
Developed by the Ministry of Health, the Syphilis No project is developed by LAIS and other partners, focusing on prevention, surveillance, treatment, and diagnosis actions for syphilis and its effects. In ENONG 2022, the goal was to present effective actions in the elimination of congenital syphilis, as well as the results in reducing the cases of acquired syphilis and syphilis in pregnant women in the country.

This Tuesday (17th), there was the first meeting of the committee of academics and specialists that will assist the State Secretariat of...

In Brasília, LAIS and ICDE sign partnerships for the 29th World Conference on Online Learning in RN

By Bruno Cássio The presence of the Minister of Health, Luiz Henrique Mandetta, representatives of the ministerial staff, members of...

By Gabriel Mascena and Letícia Meira - Ascom LAIS Between June 16th and 18th, researchers from the Technological Innovation in Health...

By Valéria Credidio (Ascom/LAIS) Going beyond the physical barriers of Natal, the 3rd. International Health Innovation Conference can...