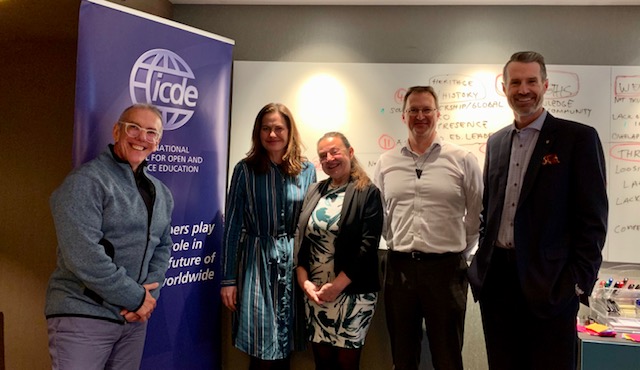 By Gabriel Mascena
In January, the researcher from the Laboratory of Technological Innovation in Health (LAIS) Carlos Alberto de Oliveira, participated in the first meeting as a member of the executive committee of the International Council for Open and Distance Education (ICDE) in Oslo, Norway. The agenda of the meeting aimed to define actions to promote education through the strategic plan for the years 2021 to 2023.

The meeting was attended by the chairman of the board, Neil Fassina, and the secretary general Torunn Gjelsvik. In addition to strategic planning, members held an executive discussion on the approval of the 2019 accounts, the 2020 budget.

“UNESCO is launching a project to decide what education will look like in 2050, and ICDE is actively participating in this. We will also continue to defend the process of implementing the UNESCO resolution on open educational objects, so we have extended the working groups that defend this issue ”, reported the LAIS researcher and member of ICDE.

Also according to the researcher, Secretary Gjelsvik will be in Brazil in March for a technical visit to the city of Natal, which will host the 21st ICDE Conference. “In March, we will be in Brasilia, where we will visit the Embassy so that I can present myself as a Brazilian member of the council’s Executive Committee. On the occasion, General Secretary Gjelsvik will present the work on ICDE, and we will then speak about the 29th Conference in Natal ”, added Carlos Alberto.

In late January, researcher Carlos Alberto Oliveira also participated in a meeting at the headquarters of the World Health Organization (WHO), in Geneva, Switzerland. He will act in the next six months as a temporary technical advisor to the agency, participating in face-to-face and virtual meetings, with the aim of developing learning strategies with technological mediation.

For the LAIS coordinator, professor Ricardo Valentim, the participation of a laboratory researcher as WHO technical advisor reinforces the importance of the work developed by LAIS. “We, as a laboratory, develop science to change people’s lives. The presence of Professor Carlos Alberto during the coming months only reinforces the innovative character of our work, showing that what we do has helped to improve people’s lives ”, he said.

Founded on August 24, 1938, the International Council for Open and Distance Education is based in Oslo, the capital of Norway. The council aims to promote flexible and inclusive access to quality education. The association also has important partnerships with bodies such as the United Nations Educational, Scientific and Cultural Organization (UNESCO).

By Bruno Cássio - Ascom LAIS/UFRN The capital of Espírito Santo state will be the national center for discussions about the...

Event organized by LAIS will occur from August 21 to 23 at the School of Government in Natal. The 1st Conference of Technological...