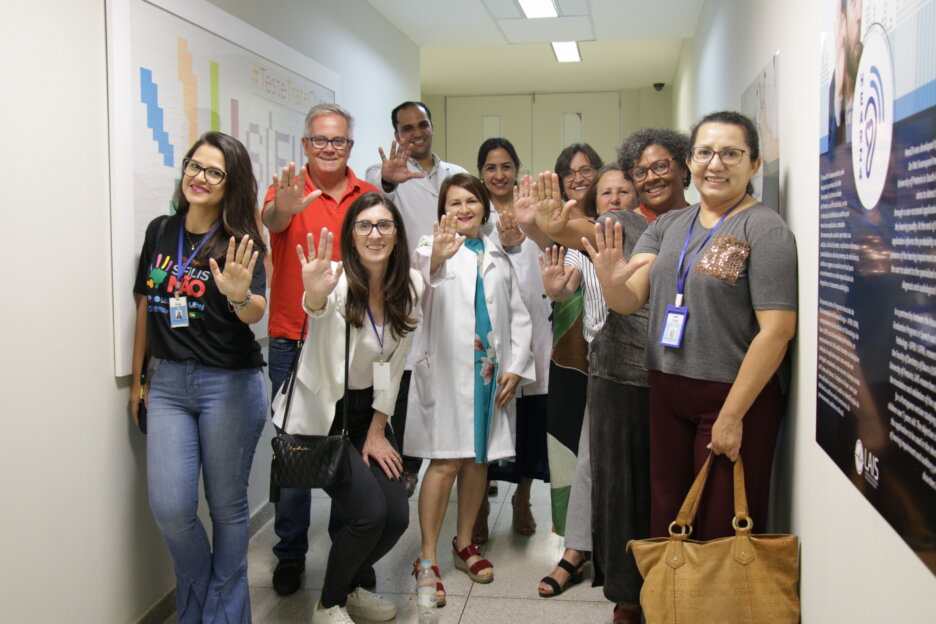 A group of supporters of the Rapid Response to Syphilis in Attention Networks Project (Sífilis Não) visited on Wednesday (27) the Laboratory of Technological Health Innovation of the Federal University of Rio Grande do Norte (LAIS/HUOL). The group met actions and projects developed by the laboratory. The schedule also included a visit to the facilities of the University’s Department of Distance Education (SEDIS).

The team had supporters from the states of Bahia, Minas Gerais, São Paulo, Rio Grande do Norte and Rio Grande do Sul. The researchers were able to see the space’s working environment and interacted with students and other researchers who work at LAIS.

According to supporter Heliana Macedo, from São Paulo, the visit served to confirm the laboratory is important for the development of technologies with the Unified Health System (SUS).

“It’s surprising. We already knew that LAIS was ‘pure innovation’, but in the visit we prove how advanced the laboratory is, how interesting it is for SUS, how it aims to bring back the patient. For us as a healthcare professional, it is gratifying to see a team committed and working on a common purpose with ours.

At SEDIS, the team got to know the work team and the activities of the portfolio responsible for the UFRN distance education centers.

About the “Sífilis Não” project
The Rapid Response to Syphilis in Attention Networks Project, commonly known as “Sífilis Não”, is the result of a partnership between the Ministry of Health and the Federal University of Rio Grande do Norte (UFRN), with support from the Pan American Organization. (PAHO/WHO), aiming at effective actions and applied research in the academic and medical areas aimed at reducing cases of acquired syphilis and the possible elimination of congenital syphilis throughout Brazil.

Acting in four distinct axes (management and governance, surveillance, comprehensive care and strengthening education and communication), the project aims to train managers and health professionals, implementing care lines for syphilis with follow-up and intervention in populations- such as groups of pregnant women and LGBT people.

The project also has the participation of several supporters who are responsible for surveillance and primary health care actions, thus strengthening the Unified Health System (SUS) and forming a fast and strong articulation against syphilis.

On the morning of Tuesday (10), professors Jose Luis Garrido and Jose Manuel Pérez, both from the University of Granada, Spain, visited...

LAIS professor and researcher Kênio Costa was honored with the Padre Sabino Gentille Medal, an honor granted by the Municipal Council of...

It is less than a month to Natal host the main event in the area of technological innovation in health in the country.  With the...

Eileithyia project was conceived in doctoral thesis of the researcher Yascara Menescal in the Maternity Hospital School Januário...