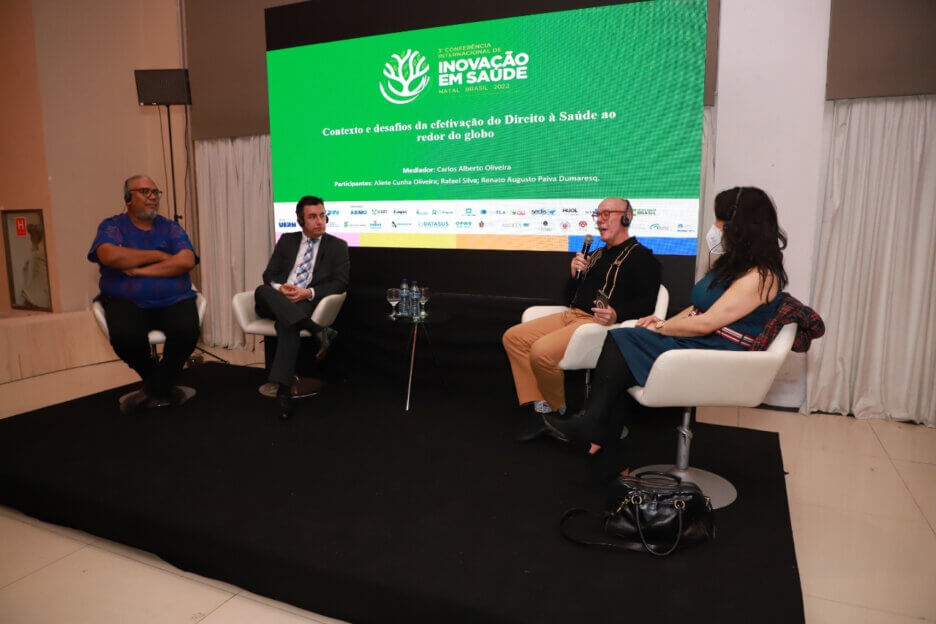 How can the law assist in monitoring health systems? It was with this premise that researchers from Brazil, Portugal and Tanzania participated this Wednesday (6) in the Right to Health panel, during the 3rd International Conference on Innovation in Health (CIIS 2022), at the Holiday Inn Hotel, in Natal. In common, the researchers alerted to the importance of data protection for the area’s service users.

The opening speech was given by Professor Aliete Cunha-Oliveira, from the Nursing School of the University of Coimbra (ESEnfC). She spoke about the particularities of the Portuguese health system, highlighting the importance of transdisciplinarity in its construction. “This integration is crucial. The effort made to integrate such competencies has enabled greater autonomy to health services,” she said.

Next, the guest of the hour was attorney Renato Augusto Dumaresq, president of the Commission on the Right to Health of the Rio Grande do Norte Chapter of the Brazilian Bar Association (OAB/RN). He presented data regarding the history of the Unified Health System (SUS) and the emergence of the supplementary health sector (private network) in Brazil. The jurist talked about the difficulties for states and municipalities to guarantee solutions to make certain procedures possible via SUS. “Due to this scenario, many people seek supplementary health care services, focused on guaranteeing care in areas in which SUS often has a certain difficulty complying. Today, people seek health plans to have total coverage, even if they have access to the same services at SUS itself. It is important to point out that the user is not the villain in this process,” he affirmed.

In his speech during the panel, researcher Rafael Silva, from the Youth with a Mission (YWAM) and Acts of Life institutions, presented an overview of the health scenario in Tanzania, where in general terms, a co-payment financing format is adopted. “Consultation costs are $1.5 on average. However, the income of a worker in Tanzania is 40 dollars a month. Therefore, more extensive treatments require a large amount of resources. To get an idea, the government estimates that only 32% of Tanzanians have some form of health insurance. In turn, 70% or more of the population lives in rural areas. That is, those who have access to health services are mostly those who live in big cities and urban centers,” he said. Rafael reinforced that the right in global health goes through an understanding of the different realities. “Each country has its own particularity. Thus, we will only have a positive global health scenario when we understand these differences that are so present in each region,” he concluded.

The LGPD and its impact on users’ lives
The final speech on Wednesday’s panel was given by researcher Luis Evangelista, from the Health Technological Innovation Lab at the Federal University of Rio Grande do Norte (LAIS/UFRN). He spoke about the importance of user data protection in the context of public health. “Our personal data has a huge market value, which only reinforces this context of protecting this information,” he defended.

The lawyer also spoke about the impact of the General Data Protection Act in the context of public health. “The LGPD is an important tool in the context of patient safety, since through it, personal data will have greater protection, granted both to the user and to health services, which will have greater responsibility in managing this information.

By Valéria Credidio (Ascom/LAIS) Brazil is the third country in the world with the largest prison population, accounting for 720,000...