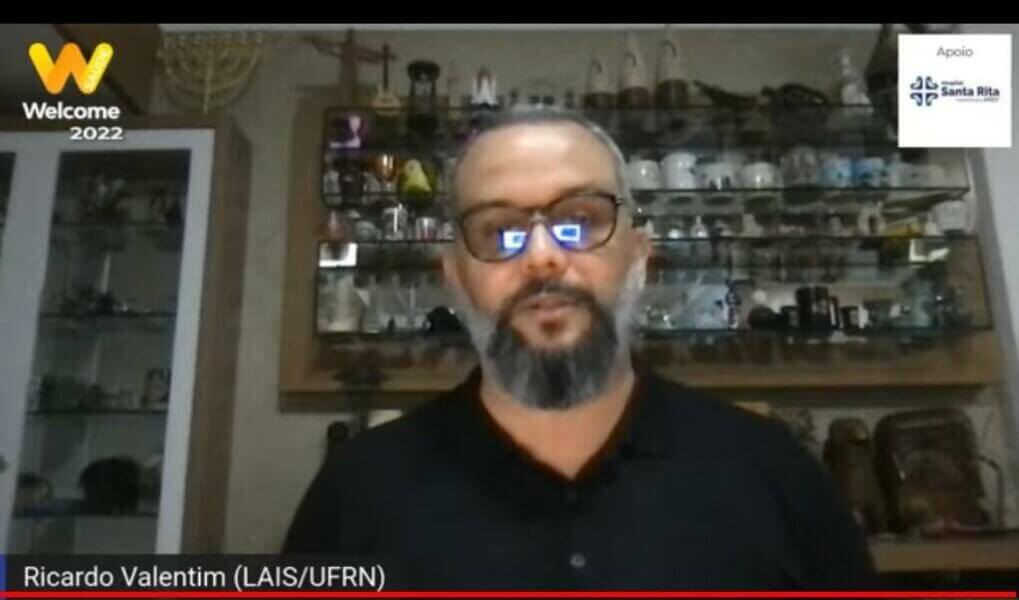 On Thursday (27) the Welcome Health 2022 took place virtually, the first major event of the year in the area of health, which aimed to discuss the economic and political prospects for the health sector throughout the year, bringing together representatives of industry, public management, health authorities and scientists. Among the participants were Ricardo Valentim, executive director of the Laboratory for Technological Innovation in Health (LAIS/UFRN), and professor and researcher Carlos Alberto Oliveira, also representing the laboratory.

Bringing the importance of transdisciplinarity in the development of research in Brazil, the event was also marked by the lecture “Research Incorporations in SUS”, given by Ricardo Valentim. “Incorporation in health is a fairly new theme. It is important to understand that health is not only in the care context. It goes through a transdisciplinary vision, that the technologies for the health area are not only developed by doctors. Research goes beyond the health area, adds value and manages to have a great impact, interfacing with various frontiers of knowledge”, contextualized the director.

As a demonstration, Valentim cited the pandemic and the development of vaccines as the union between areas of knowledge for a collective welfare. “Major health research is transdisciplinary, integrated with various technologies. The public policy agenda for Brazil has to have this look, of constant funding for research, and it must always be a state policy in order to avoid discontinuity,” he concluded.

Caparelli, justified the virtual realization of the event by the increase in the number of Covid-19 cases in the country, and assumed the commitment with the partner entities of Grupo Mídia to exchange knowledge and form joint actions.

During the programming also took place the lecture “Political and economic perspectives after the pandemic”, given by Enio Jorge Salu, consultant in Business Management with a degree in Technology from UNESP-SP. The researcher pointed out that one must work with the current political scenario, considering that it will remain for a while even if there are changes in management. “It is interesting to perpetuate the routine of changes in the compensation models and professionalization of the planning, because when I am taking care of a company in the health area, I have to look at all the visions of compensation in a business”, Enio highlights. 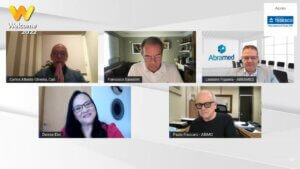 In a second moment, the debate forum “Dialogues for a Health Policy Agenda” was held, which counted with the mediation of Paulo Fraccaro, from ABIMO, and the presence of Carlos Alberto Oliveira; Denise Eloi, executive director of ICOS; Francisco Balestrin, president of SINDHOSP and CBEXs; and Leandro Figueira, vice-president of Abramed.

“We all had challenges, and in healthcare it is even more challenging in this pandemic scenario. The important thing is to improve management, funding, and the industry. We must prioritize primary care, but together with other themes that integrate this organization of care networks”, Denise proposes, highlighting the importance of investing in the secondary and tertiary care areas as well.

Leandro, in turn, emphasized the importance of policies for the regulation of the funds destined to the health area. “We need to discuss in forums like this one, to take the liberty to create and propose state policies, so we can have a more stable health system. And then the rationalization of the resources will appear, and they will be used in a better way”, he argued.

By Jordana Vieira - LAIS/UFRN Communication Advisor Once again, the work developed by the Laboratory for Technological Innovation in...

By Bruno Cássio and Marina Gadelha In October 2021, Natal will be the international capital of Online Learning and should bring...