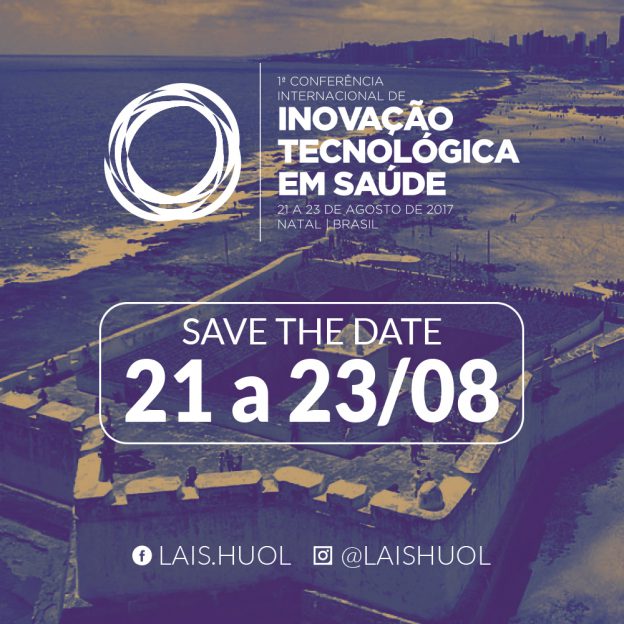 The event organized by LAIS/HUOL, 1st International Conference on Technological Innovation in Health happens between August 21 and 23.

During the three-day conference, managers, professionals and students from the areas of technology and health will have the opportunity to discuss important topics for health development in Brazil and in the world, among them endemic diseases, such as dengue, zika and Chikungunya, the health workforce and the development of technologies and devices to improve the quality of primary, secondary and tertiary care.

According to the Coordinator of LAIS, Professor Ricardo Valentim, one of the most important topics addressed during the Conference will be the professional’s formation in the health area, “One of the issues is to observe situation of the training of health professionals following the frame works proposed by UN and UNESCO for 2030. We will also discuss educational and technological policies” he said. One of the guests will be Anne Boyer, Professor of Computer Science at the University of Lorraine, France. The academic is one the top leading names on the subject in the world.

The conference will also feature the Secretary General of the International Council for Open and Distance Education- ICDE- Gard Titlestad, and the the CEO of the Baptist Hospital of Miami and of the Baptist Cardiac & Vascular Institute, Ricardo Cury, as well as a group of researchers from Harvard. “This is the first conference about the theme in the country and will put Brazil and Rio Grande do Norte on the international route of technological development in the health area” added Valentim.

In addition to the lectures, the conference will feature the presentation of academic papers. For this purpose, the interested parties must submit their proposals through the site  http://inscricao.lais.huol.ufrn.br. The procedure can be carried out until July 27. The same electronic address can be used for those who just want to guarantee registration at the event. Therefore, it´s only necessary to donate a package of geriatric diapers, which can be delivered at the event.

Learn more about the speakers

Anne Boyer is Professor of Computer Science at the University of Lorraine, France. The researcher is head of the team “Knowledge, Information and Web Intelligence” (kiwi.loria.fr) in the Laboratoire Lorain de Recherche en Informatique et ses Applications. President of the UNIT Foundation, the University of Technology and Information Engineering; and she is also chair of the ICDE “Learning Annalytics Cluster” for the period of 2017-2019.

Gard Titlestad is Secretary General of the International Council for Open and Distance Education(ICDE). He joined the ICDE in August 2011, and acted on the Nordic Council of Ministers in Copenhagen, Denmark, as head of the Department of Knowledge and Welfare. The focus of his work in the research field is, innovation and research in the name of knowledge, highlighting in particular the role of universities.

Ricardo Cury is a noninvasive cardiovascular radiologist and director of cardiac imaging at the Baptist Hospital of Miami and the Baptist Cardiac & Vascular Institute. President and CEO of the South Florida Radiological Association, a multi-specialist group of 67 physicians and amomg the top 10 private radiology groups in the United States at the International University of Florida.

By Dênia Cruz/Ascom LAIS On the morning of the second day of the 3rd International Health Innovation Conference, the panel "Science for...

On Thursday (27) the Welcome Health 2022 took place virtually, the first major event of the year in the area of health, which aimed to...

The community health agent has a primary role in tackling the new coronavirus. With this in mind, the Laboratory of Technological...