International Seminar “No Syphilis” brings together researchers and aligns partnerships 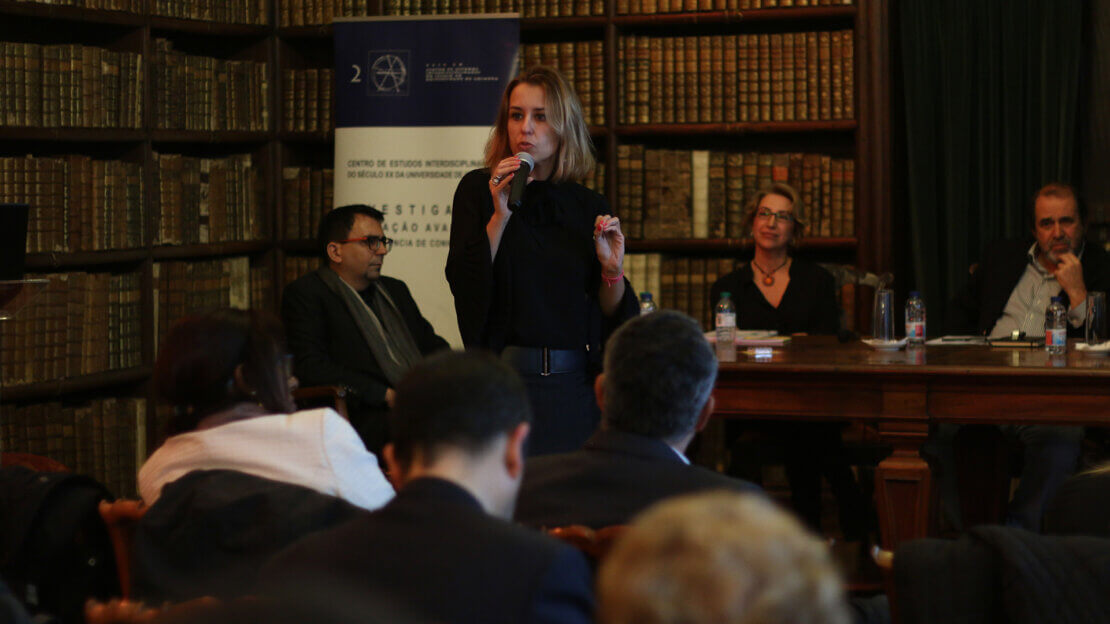 Meeting promoted by LAIS / UFRN and CEIS20 / UC took place at the University of Coimbra between 27 and 28 January; researchers aligned next steps for cooperation between Portuguese and Spanish speaking countries

Discuss the importance of international cooperation for the joint development of science in Portuguese and Spanish speaking countries. It was with this perspective – and expectation – that the seminar “International Seminar‘ Syphilis No ’from the Perspective of Human Education in Health: research in the Portuguese and Iberian space” took place between 27 and 28 January. The action, carried out in the Sala São Pedro of the General Library of the University of Coimbra, in Portugal, brought together researchers from the Laboratory of Technological Innovation in Health at the Federal University of Rio Grande do Norte (LAIS / UFRN), Center for Interdisciplinary Studies of the 20th Century ( CEIS 20) from the University of Coimbra, other universities in Europe and Brazil, as well as representatives of the Executive Powers of Portuguese-speaking African countries.

The meeting was the first to involve all Portuguese and Spanish higher education institutions involved in international cooperation of the Rapid Response to Syphilis Project in the Attention Networks, also called the “No Syphilis” project. On the agenda of the meeting, the scenario of field and research actions developed so far, as well as an overview of the goals to be achieved and also established between the parties.

The seminar
The opening table of the event was attended by authorities from most of the countries involved. The main speeches were from the presidents of the conference, professors Ricardo Valentim (LAIS / UFRN) and António Rochette (CEIS20 / UC), in addition to the dean of the Open University of Portugal, Carla Padrel de Oliveira, and the vice dean of the University of Coimbra, Claudia Dug.

The opening conference was held by the director of the Department of Chronic Conditions and Sexually Transmitted Infections of the Ministry of Health of Brazil, Gerson Pereira. The manager spoke about the importance of cooperation between public entities (Ministry of Health and UFRN, through LAIS) and the work of the Federal Government via the Syphilis No. project. Gerson also highlighted the importance of international cooperation, stating that the exchange of information knowledge between institutions in different countries collaborates to face problems related to global health. “The seminar is important so that we can exchange experiences and align knowledge on the health issue to face syphilis and other STIs in Portuguese-speaking countries,” he said.

The meeting also discussed the role of communication as a strategy to reach risk groups related to syphilis, as well as its use to face other sexually transmitted infections (STIs).

For professor Ricardo Valentim, the seminar stands out for placing an action to fight STIs developed by Brazil on the international stage. “The seminar was very important, since one of the central pillars of the project is internationalization. The international cooperation agreements built up to this point are consolidated through this seminar, which brings together the best that has been developed with regard to research, with important actors from renowned universities in Europe, to discuss the issue of syphilis in a global perspective ”, he said. him.

For professor Sara Dias-Trindade, from CEIS 20, the next step is to continue the work aligned during the seminar. “I think the next step is more ‘hands-on’. This meeting served to bring together different groups that were collaborating on the same project, in an interdisciplinary logic, planning new meetings to share these education and communication practices for the increasingly effective and interdisciplinary project ”, he highlighted.

The presentations of the seminar speakers are available through the event website: https://seminariosifilisnao.lais.huol.ufrn.br/

About the “No Syphilis” project
The Rapid Response Project to Syphilis in the Attention Networks, commonly known as “No Syphilis”, is the result of a partnership between the Ministry of Health and the Federal University of Rio Grande do Norte (UFRN), with support from the Pan American Organization of Health (PAHO / WHO), aiming at effective actions and applied research in the academic and medical areas aimed at reducing cases of acquired syphilis and the possible elimination of congenital syphilis throughout Brazil.

Acting on four distinct axes (management and governance, surveillance, comprehensive care and strengthening education and communication), the project aims at training managers and professionals in the health area, implementing care lines for syphilis with monitoring and intervention in populations- groups of pregnant women and people from the LGBT community.

The project also has the participation of several supporters, who are responsible for actions in surveillance and primary health care, thus strengthening the Unified Health System (SUS) and forming a fast and strong articulation against syphilis.

By Jordana Vieira (Ascom/LAIS) On the morning of today (14), a posthumous tribute was paid to Alessandre Medeiros, former head of the...

A new version of the work "The Inheritance", by Norwegian painter Edvard Munch, is the theme of the cover of The Lancet, one of the main...