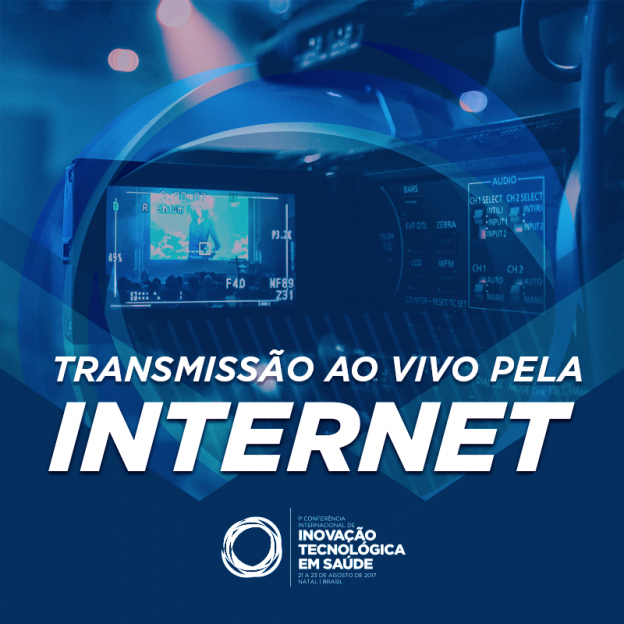 Event organized by LAIS will occur from August 21 to 23 at the School of Government in Natal.

The event, which takes place at the School of Government, located in the Administrative Center of RN, will have as its theme “The impacts of Innovation in Health in Brazil.”

The transmission will start around 6:45 pm (Brasília time), with coverage of the opening table and lecture of Professor Ricardo Cury, a non-invasive cardiovascular radiologist and director of cardiac imaging at the Baptist Hospital and the Baptist Cardiac & Vascular Institute, both located in Miami, United States. To follow up, the internaut must access the official Facebook page of LAIS, through electronic address www.facebook.com./LAIS.HOUL/.

Among the topics that will be addressed during the three days of the event, will be the development of technologies and devices to improve the quality of primary, secondary and tertiary care; the qualification of the health workforce; besides the combat and control of endemic diseases such as dengue, zika and chikungunya.

The coordinator of LAIS and president of the conference, professor Ricardo Valentim, explained about the topics that will be addressed and discussed during the event. “We will discuss the training of the health professional, observing the proposal prepared by the UN and UNESCO for 2030. We will also address educational and technological policies, “said. On this subject, the main lecturer will be the Anne Boyer, Professor of Computer Science at the University of Lorraine, France. The educator and researcher is considered a reference on the subject in the world.

Another confirmed name for the conference is Dr.Ricardo Cury, non-invasive cardiovascular radiologist and director of cardiac imaging at Baptist Cardiac & Vascular Institute, both located in Miami, United States. The researcher is also chairman and executive director of the Southern Florida Radiological Association. He will make the opening of the event, with the theme “Innovation and Imaging Diagnosis-Experience of the Miami Cardiac and Vascular Institute: the processes and their impacts”.

Three other important talks are confirmed for the other days of the event. On the 22nd, Adriano Massuda, professor at the Federal University of Paraná (UFPR) and postdoctoral student at the Harvard School of Health, will talk about the theme “The development of research and innovation at the Harvard School of Public Health: what we have to learn and what we have to teach.”

For the 23rd, at 9’clok, the researcher Gard TItlestad will talk about “Innovation and transformative education for a sustainable world”. Titlestad is Secretary General of the International Council for Open and Distance Education (ICDE). The focus of his work was the Nordic cooperation in education, research and innovation and the so-called knowledge triangle. Closing the event, there will be the lecture on Innovation, Transformation and Digital Citizenship, with Anne Boyer, professor at the University of Lorraine.

During the three-day event, the broadcast via Facebook will always start 15 minutes before each schedule.

In a more practical and casual way, the organization of the event innovates promoting the Coffee with Innovation, which will have two editions, the first on the 22nd and the second on the 23rd . The Coffee will discuss fundamental issues for technological innovation in the form of a conversation among professionals from the area. On the first day, Professor Ricardo Valentim will mediate, with the theme “The challenges of Innovation in health in Brazil: the role of universities and the relationship with the productive sector”. The guest will be the Rector of UFRN, Professor Ângela Paiva Cruz.

By Heloísa Lemos - Ascom/LAIS The Laboratory for Technological Innovation in Health (LAIS/UFRN) in partnership with the Health...

By Jordana Vieira - Ascom/LAIS Scientific research with the potential to produce technologies that have the impact of transforming,...

The Laboratory of Technological Innovation in Health at the Federal University of Rio Grande do Norte (LAIS / UFRN), in partnership with...

By Bruno Cássio - Ascom LAIS/UFRN  At the official opening of the 15th International Congress of the United Network, held this...