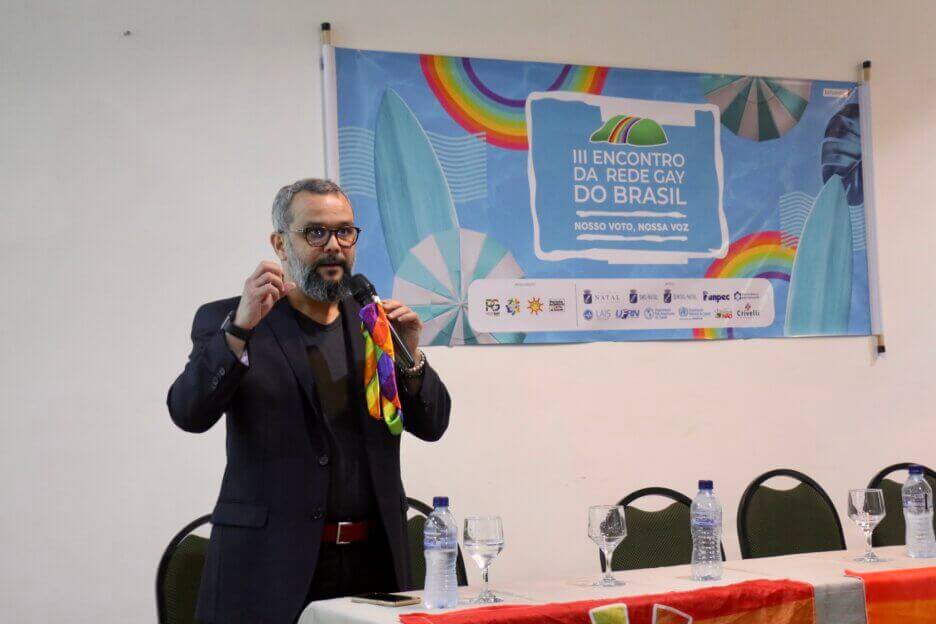 More than 170 thousand people, all over Brazil, are qualified as to the knowledge regarding syphilis, its prevention, diagnosis and cure. This was one of the information transmitted by the executive director of the Technological Innovation in Health Laboratory (LAIS/UFRN), Ricardo Valentim, during the opening of the III Meeting of the Gay Network of Brazil, in Natal.

During his speech, which took place on the evening of Friday (6), the executive director of LAIS reinforced all the work that has been developed by researchers within the “Syphilis No” Project and the results that have been achieved, such as the qualification of health professionals and change in behavior of the population facing syphilis.

This qualification has been taking place through 52 courses distributed in training tracks available on the AVASUS portal, a virtual learning space developed for health professionals and students and also for civil society, with the main objective of qualifying training, management, and assistance in the SUS. AVASUS is the result of a partnership between the Ministry of Health and UFRN, through LAIS and the Distance Education Secretariat (SEDIS).

“Our studies point to an important relationship between professional training and the drop in cases, especially of congenital syphilis,” reinforced Professor Ricardo Valentim, citing scientific articles, authored by LAIS researchers, that prove this relationship and that have been published in international journals, such as Nature and the Lancet.

Gay Network Brazil
In this third meeting, the organizers of the Gay Network Brazil focus on strengthening public policies and encouraging voting. The Network is a civil society movement, which has only four years of existence and has as its main goals the cure for AIDS and the criminalization of homophobia in Brazil.

As emphasized by the Network’s president, Fábio de Jesus, the movement is formed by people from all over the country and needs to get stronger. “We need to update the project for a Brazil without violence, prejudice, and homophobia. This is fundamental for the whole society, including all those who are outside public policies.”

The invitation for LAIS executive director to deliver the opening lecture of the III Meeting came from the local organization of the event, headed by Wilson Dantas. According to the organizer, the partnership with LAIS is fundamental to discuss topics such as syphilis and raise awareness among the LGBTQIA+ population about the necessary care. “This partnership with an institution that has research directed to finding solutions is fundamental,” reinforced Dantas, highlighting the participation, fundamental, of LAIS during the confrontation with the covid-19 pandemic in Rio Grande do Norte, through the creation of technological tools. “Regula RN has guaranteed to the whole society transparency never seen before in the entire health system,” he stressed.

For the LAIS director, the partnership with the Gay Network is important, mainly, in strengthening care for all. “Caring for the gay population is caring for the health of the community.”

By Gabriel Mascena In January, the researcher from the Laboratory of Technological Innovation in Health (LAIS) Carlos Alberto de Oliveira,...

By Thays Teixeira - from LAIS / UFRN Technology-mediated education has been a challenge for many public school teachers, especially with...

The possibility of predicting epileptic seizures is the focus of the research developed by the researcher from the University of Coimbra,...

ALS Self-Reporting Platform and Observatory is presented during virtual ceremony

By Arthur Barbalho - Ascom/LAIS Focused on knowing the real profile of patients with Amyotrophic Lateral Sclerosis in Brazil, the...