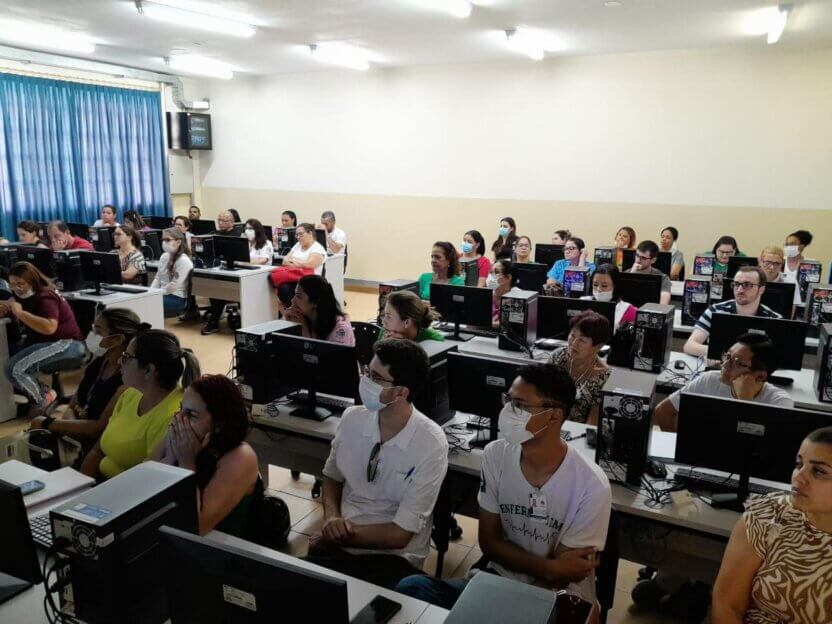 A team of researchers from the Laboratory for Technological Innovation in Health at the Federal University of Rio Grande do Norte (LAIS/UFRN) landed earlier this week in the city of Araçatuba/SP, about 520 kilometers from the capital of São Paulo, to train about 200 health professionals who will collaborate with the implementation of the Salus 2.0 system in four municipalities in this initial phase.

On October 10 and 11, four groups, with an average of 50 students each, were instructed to simulate the insertion of new records in the platform that makes the intelligent monitoring of syphilis cases, with emphasis on congenital syphilis notifications. The training was attended by Primary Care, Health Surveillance, and Management professionals from the cities of Araçatuba/SP, Birigui/SP, Sud Mennucci/SP, and Clementina/SP, which together have a population of approximately 340,000 inhabitants.

The Secretary of Health of Araçatuba/SP, Carmem Guariente, made a point of attending one of these classes and, as a manager, evaluated the practicality given by the system that, according to her, “allows you to have management reports to identify situations and develop strategies to improve the service provided to the public.

Nurse Renata França, on the other hand, attested that “this platform is very facilitating for the follow-up of cases and several professionals can have access to reliable data”. For Igor Samuel Serradilha, who works as a nurse at the Health Surveillance of the Araçatuba/SP Emergency Room, with the system in operation, “the health units will join forces to have a better outcome of the cases”.

The Salus 2.0 platform is part of the actions of the “Syphilis No” Project and is in operation in cities of the states of Rio Grande do Norte, Pernambuco, Rio de Janeiro, Mato Grosso do Sul and Roraima. According to LAIS/UFRN researcher Fernando Lucas de Oliveira, “the reception that the team had by the management of the São Paulo municipalities, shows how the professionals from these places are motivated to face syphilis with the help of technology”.

Researchers from LAIS carry out deliver of diaper earned

The afternoon of this Friday (25) was of solidarity. Two days after de 1st Conference of Technological Innovation in Health, promoted...

Prison system will be the theme of a debate among researchers

By Gabriel Mascena - Ascom/LAIS The situation of people in prison will be the theme of another panel that makes up the program of the...